This week, BBC Radio 3’s always diverting Between the Ears series opened up an inventory of cassettes packed with the life and work of a man named Mark Talbot. For decades, Mark made his own radio shows, usually called ‘Second Side Up’, complete with records, phone-ins and interviews. But while the clips suggested him to be an articulate and slick host, he never became what you might call a ‘professional’ presenter on a national or even a local station. Instead, his programmes were specially and even individually made for members of his family, his friends and partners. It’s a melancholy but compelling half-hour about how the very act of communication can become an obsession. A kind of dialogue at one remove.

One piece of music I keep going back to is called “I’m 49” by Paddy McAloon, the songwriter and frontman with the group Prefab Sprout. It lies somewhere between electronic and orchestral music, with a yearning but resigned quality to it, but what gives it an extra devastating edge is in its use of speech samples, taken from late night radio conversations and phone-ins. The callers are unhappy and even desperate. At the close of the track someone (Paddy?) almost whispers ‘Just hold me’.

The genesis of the track, and indeed of the whole record, I Trawl the Megahertz, had come from a period of convalescence for McAloon; after eye surgery, he had to rest his sight, and so relied on radio and sound which sparked his creativity into making a solo record (his only one to date).

It’s a given that many radio listeners are lonely, especially at night. I find it a shame that more and more night-time radio is now automated or pre-recorded, even on a national station like BBC Radio 2 which recently dropped the much-loved Janice Long and Alex Lester.  There’s no shortage of stuff to listen to in the dead of night, but little of it is live and interactive. And in the small hours, people often need company. Even if it’s just to say hello to someone.

What the life and work of Mark Talbot suggests is that, sometimes, it’s not just a listener that needs support and an outlet. Sometimes it’s the presenter that might need it. And of course, you can’t award everyone national exposure but what ‘Second Side Up’ underlined is that everyone needs at some level to express themselves somehow and somewhere.

Thirty years ago or so, in my teens, I worked in radio for a bit, firstly as a volunteer at hospital radio and then at local radio. In the early stages of learning the ropes of broadcasting, you were advised to imagine you were addressing just one listener. At the time, I presumed this was to calm a novice’s nerves, but over time, I realised it was probably also to banish any delusions of celebrity that a budding presenter might be hoping for.

When it soon became clear, at least on hospital radio, that I had very few or indeed no listeners, I would occasionally amuse myself by making and recording programmes for my friends. Back then, I wasn’t sure why I did this, but I think I did it to sound more confident, or at least to find a context which gave me a reason to communicate. If it was just me, with no records or microphone, it felt like it wasn’t enough.

I was about to say that I don’t do that anymore, that those lonely years were a long time ago, but are they always? There are times when all that’s changed is the medium. Tweets have the concise economy of radio links, and you can be serious or silly, but sometimes I strain to come up with them because behind it is a terrible feeling of not being good enough, that everyone else is having a better time.

In a sense, on social media, we front our own shows: linking to playlists and video clips, announcing events, reacting, commenting. But what if we wake up in the morning and we have nothing to say, or nothing we can face admitting? You might be able to unleash one plaintive status update on Facebook, provided you offer the disclaimer that you’re over the worst now. But you can’t do it again. No-one, you assume, will want to read that.

At least with Twitter, you can do that a bit more often, but you feel it’s on the condition that you have to think of some witty metaphors along the lines of ‘I am wearing a grey hat made out of screaming wasps’. In other words, something that might distract people while you wear yourself out.

Maybe you need to talk to someone. In real life. Where ‘it’s really complicated’. 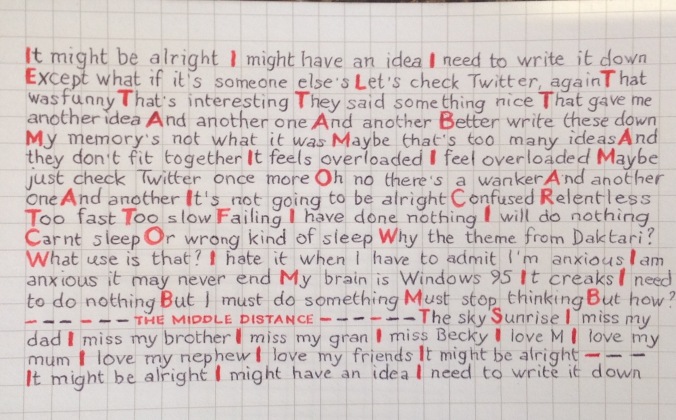